The Making of The O Beach Ibiza Shows

At O Beach Ibiza we are big fans of a theme, if you haven’t already noticed! We love to make things as colourful, crazy, interactive and most importantly as fun as possible. The crane shows at the day club really have become synonymous with our brand and, therefore, a huge part of the experience. So, every year we enjoy fully indulging in being as creative as possible, to bring more surprise moments to every event across the summer.

We always try to take everyone on a journey and, while at this moment we may not be able to take all those journeys, let me take you through some of our favourite shows from across the years. I’ll touch on where we got the inspiration from, some of the steps of the process and of course the finished articles.

The show with a bite! 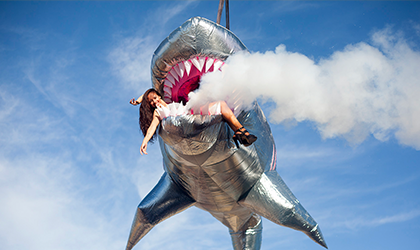 The shark is one of our best loved show moments and is a prop that refuses to get old! This snappy little fella was created as the main focal point for our ‘Under the Sea’ theme for the Friday Pool Party events in 2016. The idea behind it was inspired by the cult classic film Jaws and an image taken for Harper’s Bazaar, which featured singer Rihanna inside of a shark’s mouth. 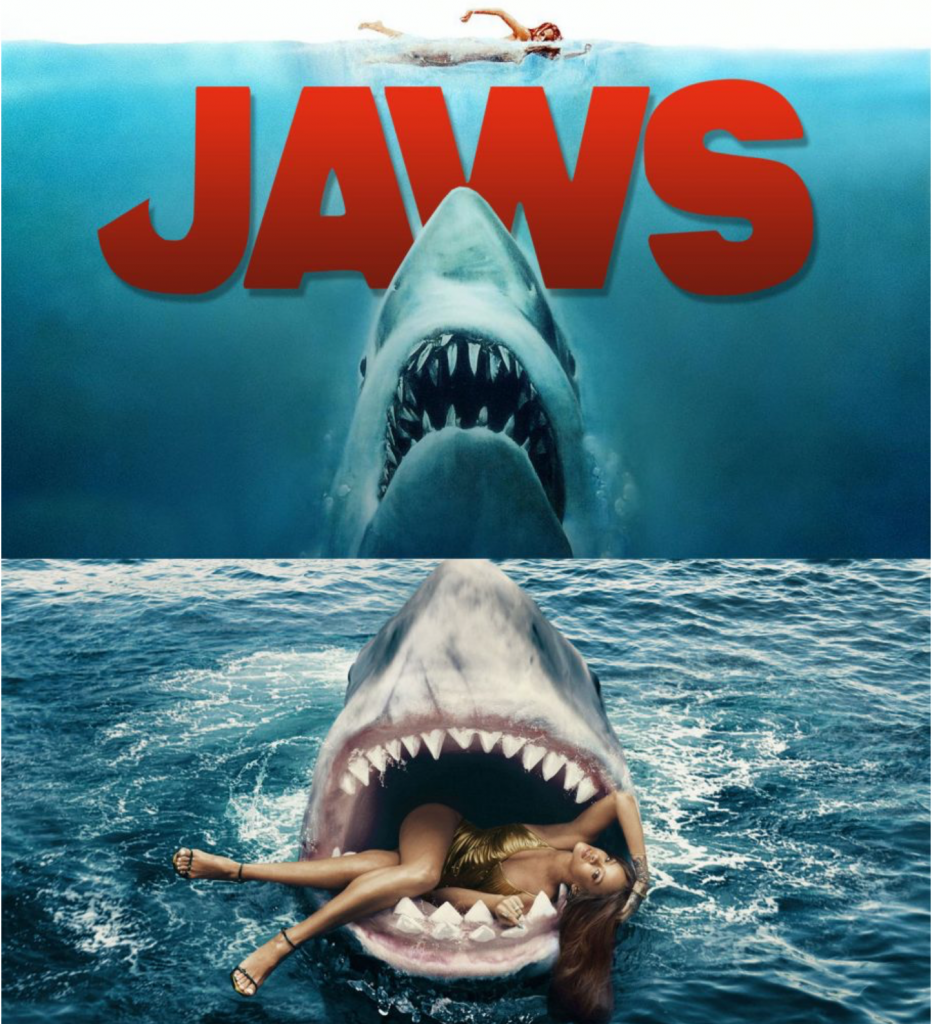 The prop and show proved to be a real turning point for us. We discovered that, by including CO2 and moving mechanics to the props, as well as incorporating specifically curated music, it really took our shows to the next level. This was achieved by merging two of our production companies together – while the incredible, London based, Studio Souffle would recreate our vision aesthetically with inflatables, our in-house Ibiza production team, Arte Volante, worked on the inner mechanics. It proved a winning combination. Every prop is made from scratch, exactly how we want it, down to the finest detail. But the process is very long and meticulous, as we always want the result to be perfect!

The shark show featured one of our aerialists soaring across the skies in the mouth of the beast, screaming for help, while the jaws soundtrack played eerily throughout the club. The shark’s tail swung ferociously and CO2 blasted from its mouth, until the music reached its crescendo. When the classic dance track ‘Make the World Go Round’ by Sandy B dropped, perfectly in time with the confetti cannons, it was so much fun to watch everyone screaming, laughing and having a right good dance. It was retro and camp and it worked! 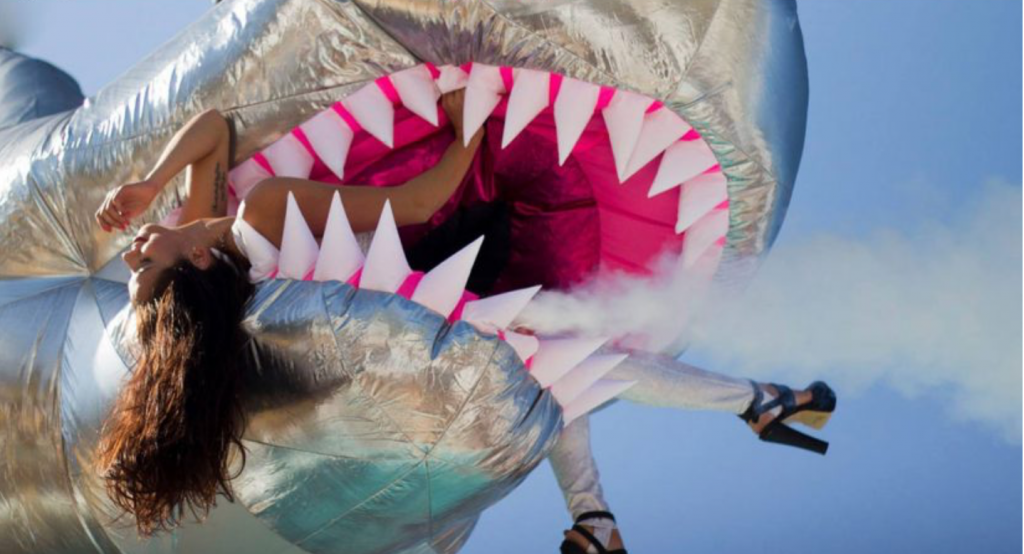 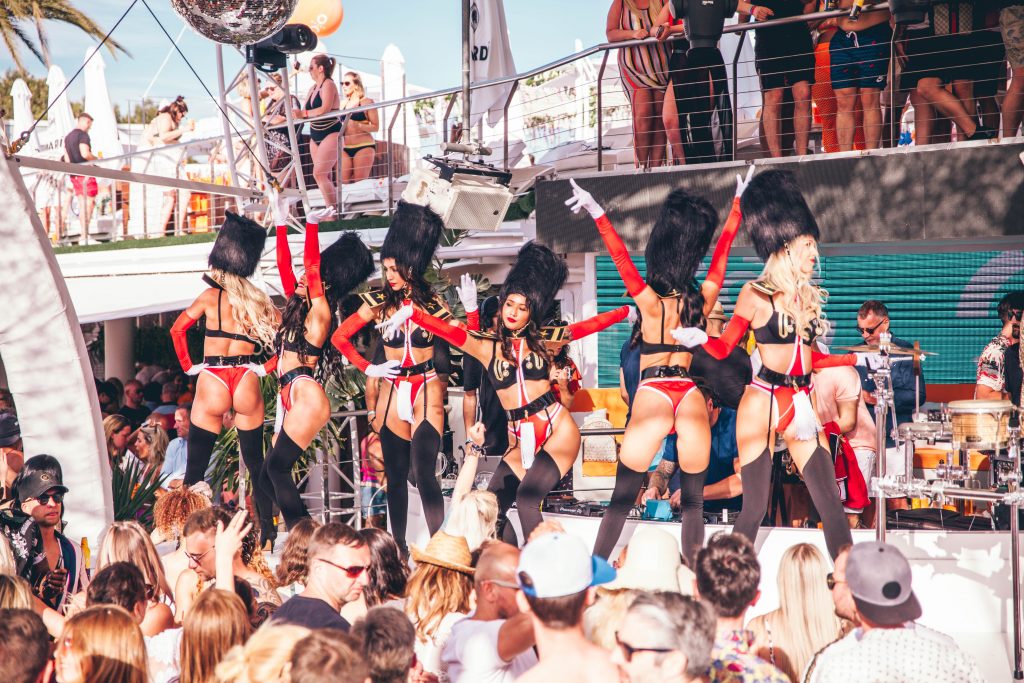 Last year, one of our event themes was ‘Wanderlust’, meaning ‘the desire to travel’. Every Friday, it saw us fly the day club around the world to different locations, via the power of imagination. This whole theme really came about because I’d had an idea in my head, for a couple of years, that I wanted to create Beefeater costumes for our dancers.  Don’t ask me why, but I thought it would be really fun, ha! What it does go to show is, that if you have one idea, you can take that thought and run with it as far as you want. 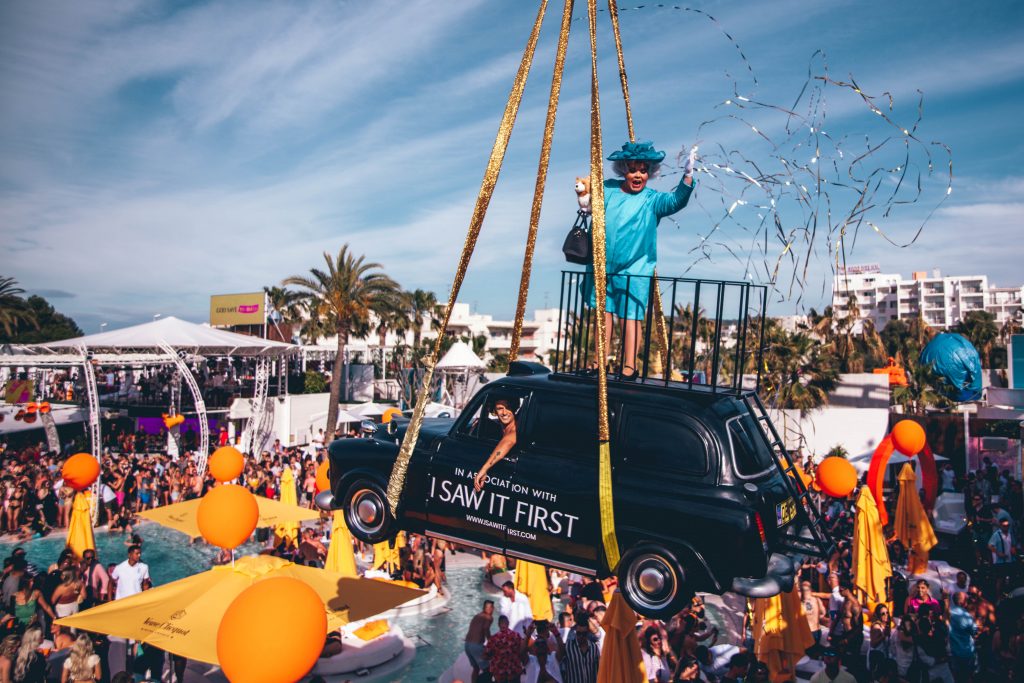 The day club is English owned, so we thought it would be really fun to create a patriotic show dedicated to England. The show began with our very own ‘Drag’ Queen Elizabeth (AKA Ruby Murry), complete with a corgi dog, arriving by crane on her very own Black Cab. Once on the ground, Her Royal Highness was flanked and protected by her Royal Guards, as she made her way through the club to the sounds of the British National Anthem, ‘God Save the Queen’. Simultaneously, a life-size red double-decker London bus descended across the skies, accompanied by three of our beloved Mary Poppins, flying by their umbrellas and giving us an aerial performance. The sounds of Big Ben chimed across the venue and you could really feel everyone’s anticipation building, wondering what could be coming next. Then, as the final chimes rang out, there he was – Freddie Mercury, appearing just as ‘We Will Rock You’ belted out across the club! 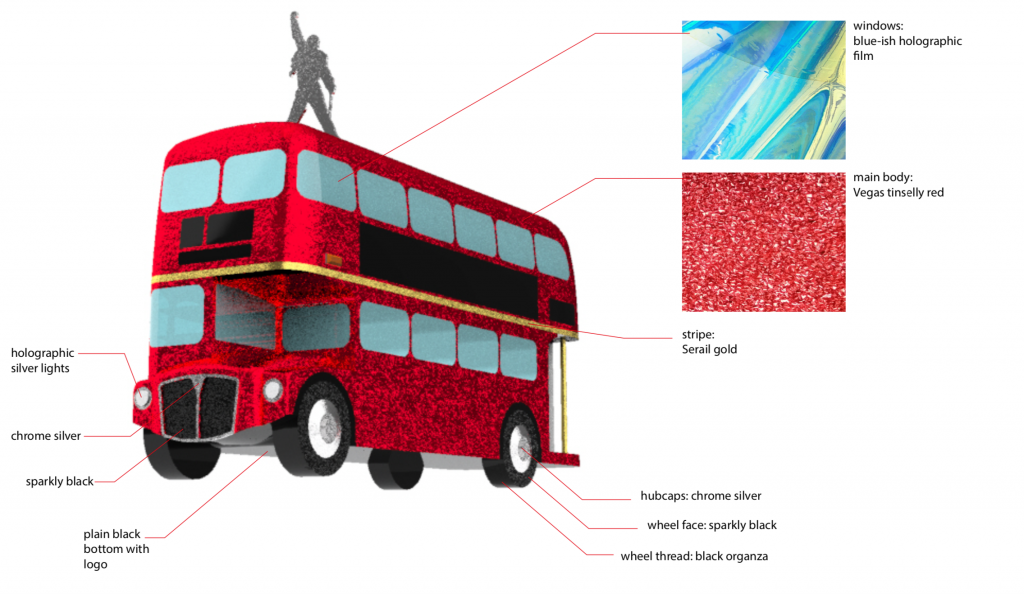 This first time we revealed this show I actually nearly cried – the crowd participation was just insane! Seeing everyone watching everything that was going on around them and singing, with their hands in the air, was a real stand out, ‘hairs on end’ moment for me. Knowing that we had created such a special, fun moment for everyone made me feel really proud. 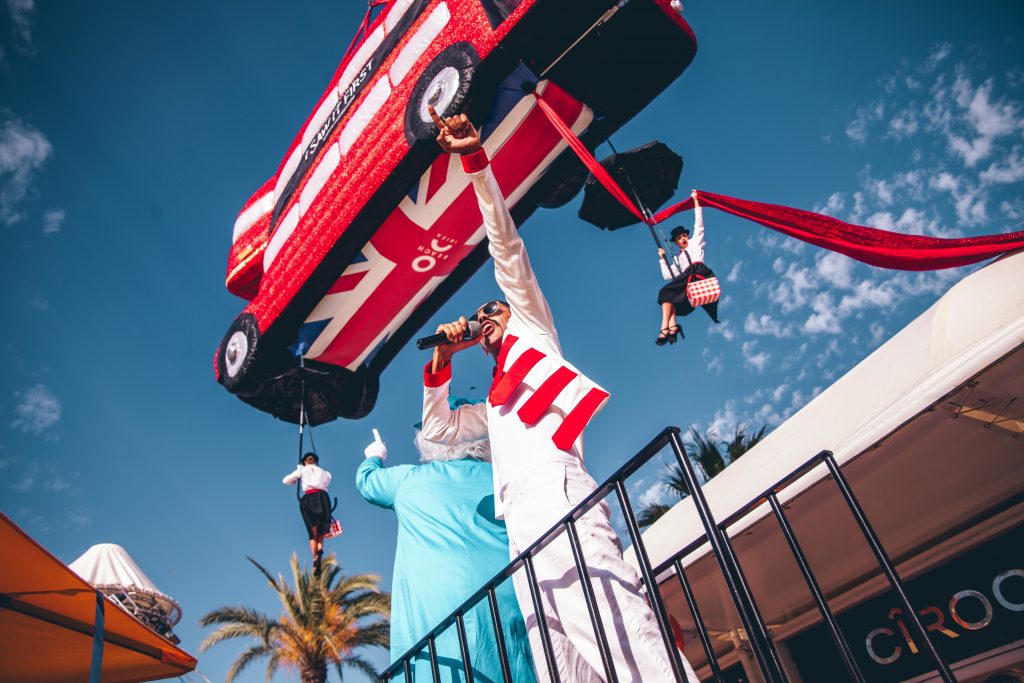 Roll up, Roll Up the Circus is in town…. 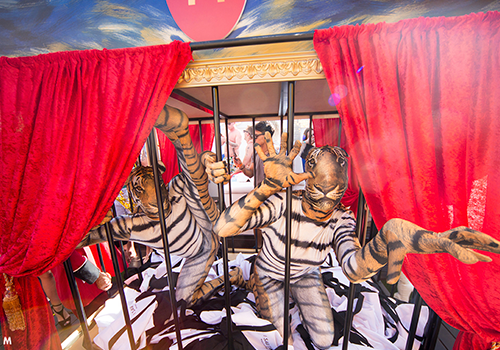 Now I was fully aware when we created this theme that it’s not something new and it has been done before. But the name of our game is FUN, with our motto being ‘we’re here to celebrate not educate’, and that’s exactly what we want our customers to do – celebrate life and be in the moment. Therefore the circus was a perfect theme to get super creative, with lots of tongue-in-cheek performances, including a stunning vintage horse carousel, a big, bright helter-skelter, giant, inflatable pool hook-a-ducks and (would you believe?) a three-boobed, freak show lady that fired out pyrotechnics from her nipples! 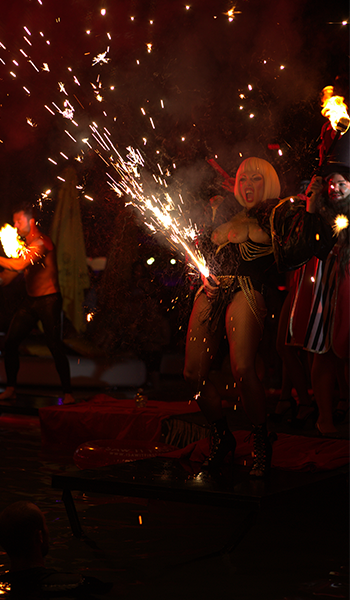 We really wanted to create a spectacle from all levels for this show. So, while our commanding ringmaster arrived upon a beautiful circus elephant, floating through the blue sky on a hot air balloon, on the ground we had a cage of tigers causing mischief with the customers throughout the day club and clowns on stilts leading the way.  Obviously, no animals were harmed in the making of this show – they were either inflatable or contained humans 😉 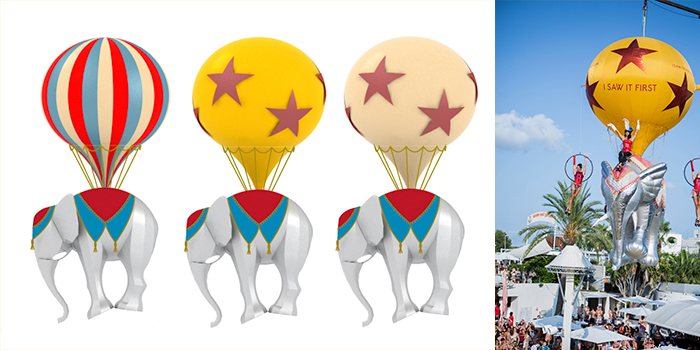 It was important for this crane prop that we chose the right fabrics for the elephant and the hot air balloon. To ensure it made that grand entrance we were after, we chose a mix of brightly-coloured ripstop fabrics and beautiful metallics, along with an accompanying circus music medley. It meant this showstopper would not go unnoticed by anyone. 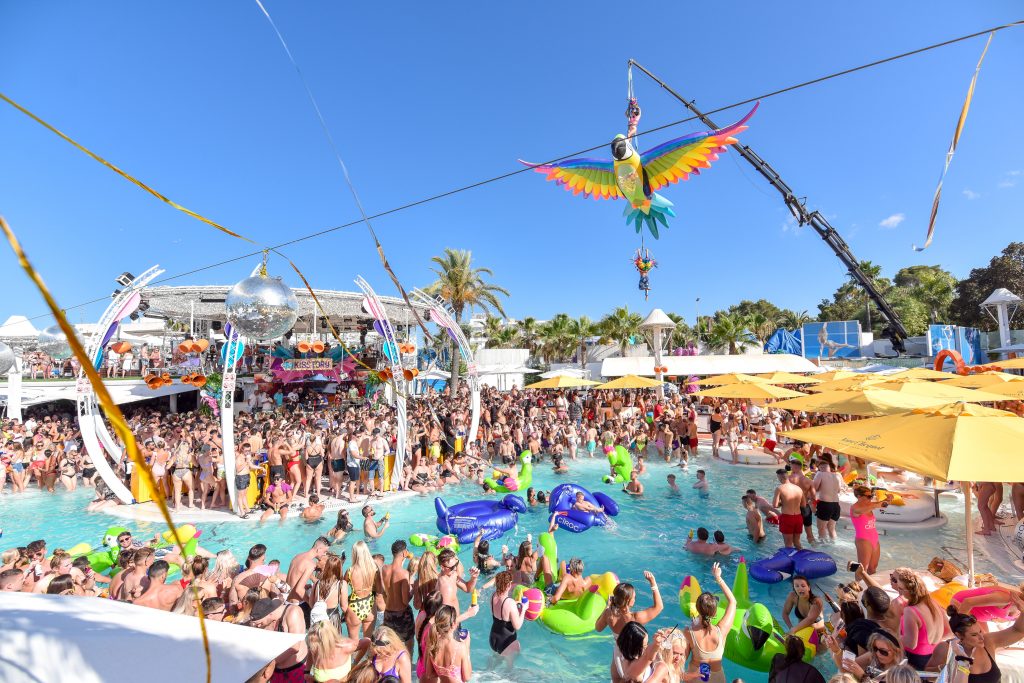 This was a theme that was decided in a boardroom in London, with the Kiss FM crew. It was a perfect choice for our Kisstory events, as that party was pretty much a carnival of carnage every Tuesday.

For this 2019 show we studied the incredible Rio carnival, which gives you so much inspiration. We spent hours on Pinterest (my favourite hobby), looking at all of the incredible floats in Brazil – the time and effort that goes into the staging, costumes and choreography for their infamous street parade is just another level!!!

Our Bird of Paradise show could arguably be presented with the crown for our ‘most beautiful yet’. It took a while to come to the final choice of materials – a combination of neon, iridescent feather-effect elements and glittery fabrics, which all ensured it looked like it had flown in direct from Paradise. The wings were created with a mechanical motion, so it would look like the real thing and, to create more drama, we added the CO2 effect from the bird’s mouth! 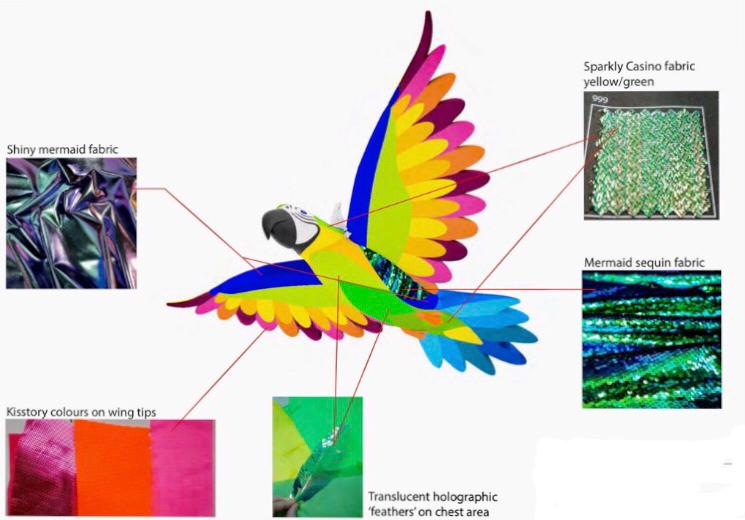 The show wouldn’t have been complete without a lion float on the ground, dancers in wonderful, bright feathered costumes and drumming zebras who danced to our mix of mardi gras beats, all driven on by Sam Slattery on drums on the stage.

A monster of a show…. 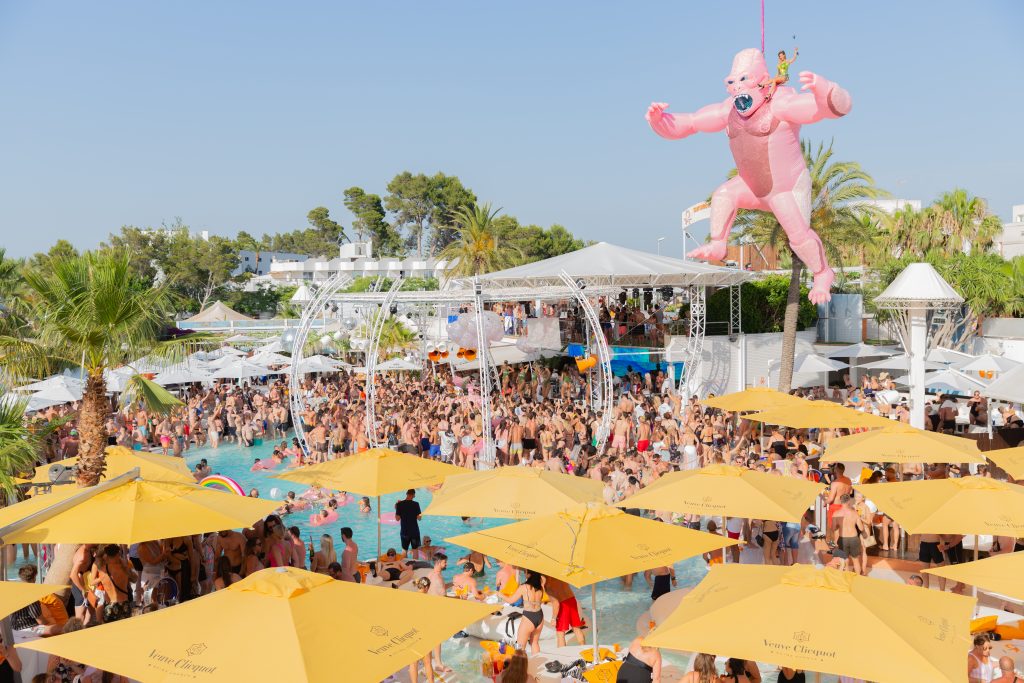 Most people feel like they’re in ‘Dreamland’ when they’re in Ibiza. But, with this theme in 2018, we really wanted to create a crazy wonderland of characters that you would only see in your wildest dreams!

Step forward Queen Kong! – our parody version of the fearsome movie monster. We really wanted to create a dramatic moment for this show and make everyone feel like they were in the movie or in fact in a dream like state! For this prop we chose the campest shade of pink faux fur for the gorilla, to sit alongside her glittery pink belly. Because, in dreams, everything can be a bit wonky and not quite what you expect. Her angry fists, controlled by a mechanical function, would beat her chest, as she ran riot across the day club skies with her kidnapped victim perched on her shoulder screaming for help. Queen Kong appeared overhead to the sounds of gorilla roars, police sirens, helicopters and screams, which stopped everyone in their tracks, wondering what was going on. 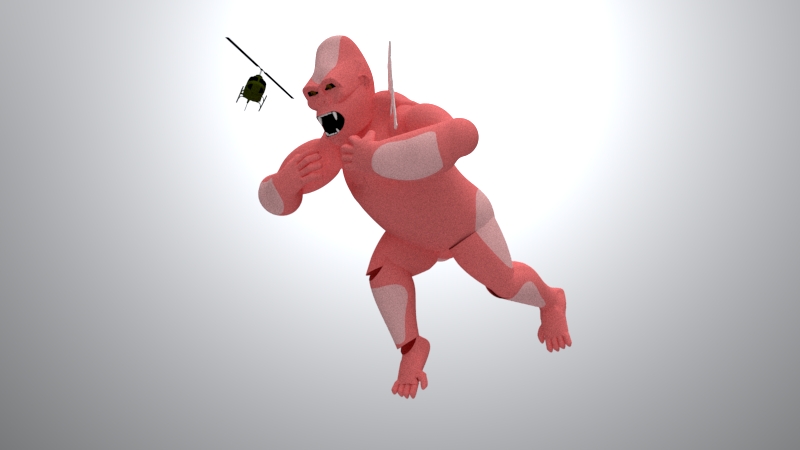 Our marching army on the ground would stomp through the day club, under the command of our very own Sergeant Sassy, who sat upon her big pink tank. Momentarily, the army and the tank would aim at the gorilla ……. Ready, Aim, Fire……. they would fire! But in our version, they would only shoot out love, confetti and CO2! When the entrance roars reached their angry peak, the track, ‘Devotion’ by Bingo Players, burst out through the speakers and you could literally feel the energy explode in the venue. The excitement from everyone, feeling the Ibizan vibes under the Mediterranean sun, used to create the perfect moment. 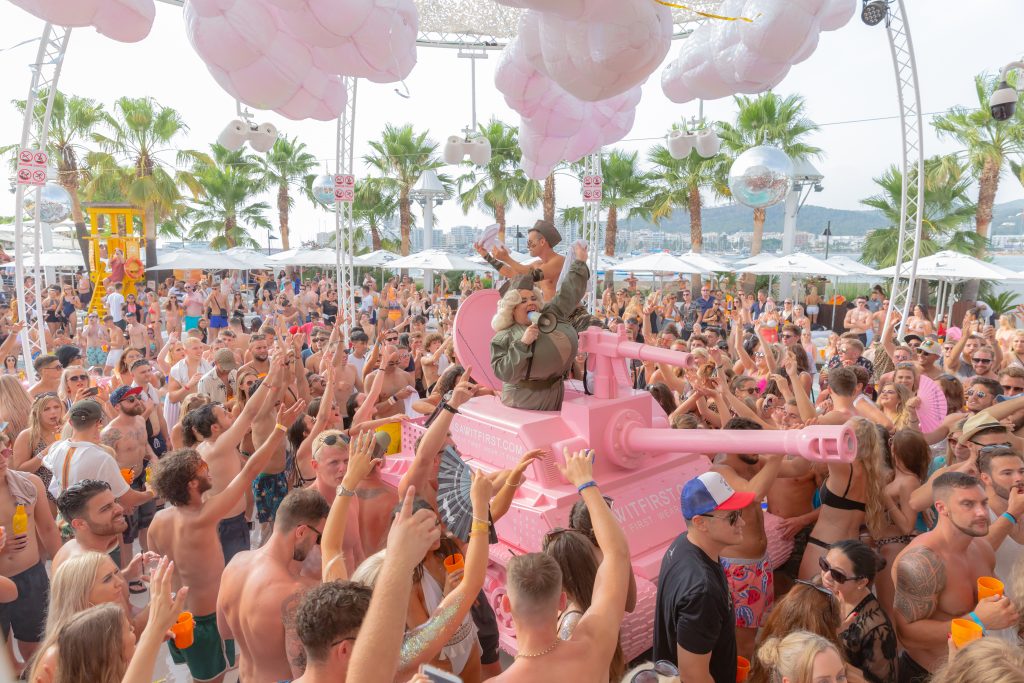 So as we continue to navigate our way through these strange times we’re still busy behind the scenes working on our next brand new themes and shows which we are excited to reveal as soon as we can. Can you guess what our new shows will be?

How to get a job in events and marketing in Ibiza