Often described as an enchanting wonderland where everyone is welcome and troubles are left at the door. O beach Ibiza is a balearic utopia for the free spirited adult who lives life to the fullest and always finds time for a little adventure!

As we come to the end of the season we reflect on what a phenomenal summer we’ve had. Once again we have lit up the O Beach sky with everything from giant flying parrots to the traditional London bus, not to mention our very own Mary Poppins elegantly hanging below occasionally giving the beach club a cheeky glips of her union jack knickers.

Being in the hub of the party paradise of the world there is never a dull moment. We have had 6 months of laughter great music and colorful characters (not just the entertainers) but staff and visitors alike. So we wanted to take a moment to deliver you the highlights of 2019 so together we can relive some of those magical moments that will never be forgotten!!! 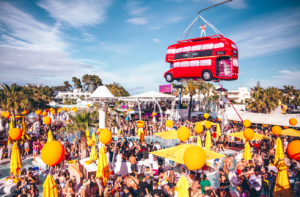 Every Pool Party created starts with an idea a pinterest board and a lot of discussions. Each year we rack our brains on how we can out do the previous summer and we feel the London show has been a prime example of that. With Wunderlust Pool party we aimed to transport you to some of biggest cities around the globe. The London show starts with our seriously seductive Beefeaters slowly marching to attention as the very familiar London black cab flies into the beach club, upon it standing the one and only her majesty the queen.

As the taxi lands in VIP joining our dancers who are stiffly standing to attention, onlookers are scratching their heads wondering what is going on. When out of nowhere our life size London O beach glitter bus bursting with character accompanied by our very own Mary Poopins acrobats comes gliding through the sky as the national anthem bellows through the beach club. They all collective march to the DJ booth with Queenie waving at her admires below, but of course in true O Beach style there is a twist as Freddie Mercy struts to the top of taxi interrupted the music with one of Queens many hits …. WE WILL ROCK YOU!.

Fisher on stage with Musicians

Hedkandi Monday’s are all about our 4 super star musicians who take the audience on an unmissable journey each week with their high energy sets which takes the crowd by storm. However in September the crowd were taken by storm in another way when DJ of the moment FISHER had his very own moment of ‘LOSING IT’ when he jumped on the stage with the musicians casually pretending to be a janitor with his broom until he actually lost it and fell off the stage in to the crowd… talk about catch of the day! 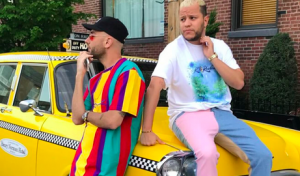 With the growing popularity of the club comes more events and earlier starts to the season. This year on the 22nd May we welcomed Kinky Malinki back and were really happy with the result. They welcomed one of our favourite duo’s to the decks Amine edge and Dance. The guys took to the decks delivering a classic house set holding the audience in the palm of their hands throughout. 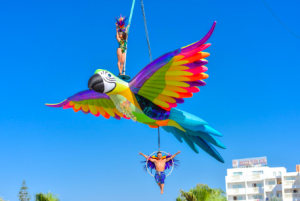 We couldn’t write this blog without mentioning our stunning bird of paradise that made an appearance every Tuesday for Kisstory. Our Kisstory Carnival wouldn’t of been complete without this huge bird glittering in the sun with it’s array of tropical colours shining down for all to marvel below. Along with this our dancers parade in their glittering sequins and jaw dropping feathers to create that true carnival feel! 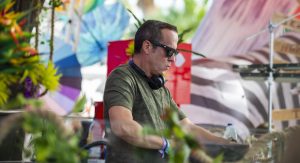 House in paradise is known for it’s tropical vibe, venue changing production and uplifting house music which once again did not disappoint this year. Along with their resident djs they welcomed the super talented David Penn to the O Beach decks for an hour of unmissable music, creating a day that won’t be forgotten. Include a couple of his big tracks such as Nobody  https://www.youtube.com/watch?v=aWmxxeNpAXA and Big Love https://www.youtube.com/watch?v=gu5XC1_nrcM

The kitchen at O Beach is a huge operation, feeding our customers with first class dishes is at the top of our priority and as we see the growing number of vegetarians and vegans around the world we aim to cater for all. The Vegan Burger is bursting with flavour and even if you choose to eat meat we can guarantee it’s so tasty you’ll choose this cow free option over the meat version. 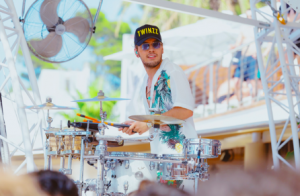 Sam Slattery on the drums

Anyone who has managed to visit the beach club this year would have noticed our amazing new addition to the O Beach family. Sam Slattery our superstar drummer with stick skills that are truly spectacular. For anyone who has been lucky enough to see him in action I’m sure you’ll agree he definitely made you dance to the beat of the drum. 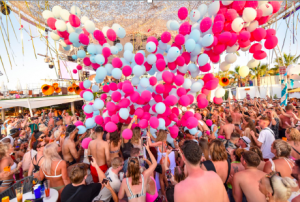 Monday’s are full of an electric atmosphere created by the feel good live music throughout the day, however always wanting to be the club that never fails to surprise, we wanted to add something with a little extra bang for anyone enjoying the musicians last set. Audience and staff got down low cheek to cheek with the musicians on the dancefloor while they performed their own version of Eric Prydz Pjanoo, the tension builds, the track reaches it’s drop and boom our balloon drop consisting of 1500 pink and blue balloons descends upon the crowd as everyone jumps up hands in the air, the balloons tumble on top of the dancefloor along with ice cold co2 leaving the audience lost for words and the balloons in a frenzy.